Each quarter, Zillow releases the Zillow Home Price Expectations Survey. This survey involves asking more than 100 economists what their expectations are for the upcoming year for metropolitan areas across the country. In the recent survey, Phoenix was one of the best real estate markets for price growth.

Phoenix Is Dealing With a Mismatch Between Supply and Demand

Metro Phoenix is supposed to be one of the top five housing markets in the country in 2020. The main reason why prices are rising is because of the mismatch between supply and demand. While more people are interested in buying homes in the area, the supply of homes is not increasing at a fast-enough rate to satisfy that demand.

Housing demand in Phoenix is increasing because millennials, families and business professionals are moving to the area. Arizona is enjoying one of the highest levels of population growth in the country. After the recession, the state government began focusing on recession-resistant sectors like healthcare, bioscience and technology. The growth of these sectors has attracted employees from across the country. Most of these new residents have higher incomes and educations than the average person has, which helps to fuel the local economy. 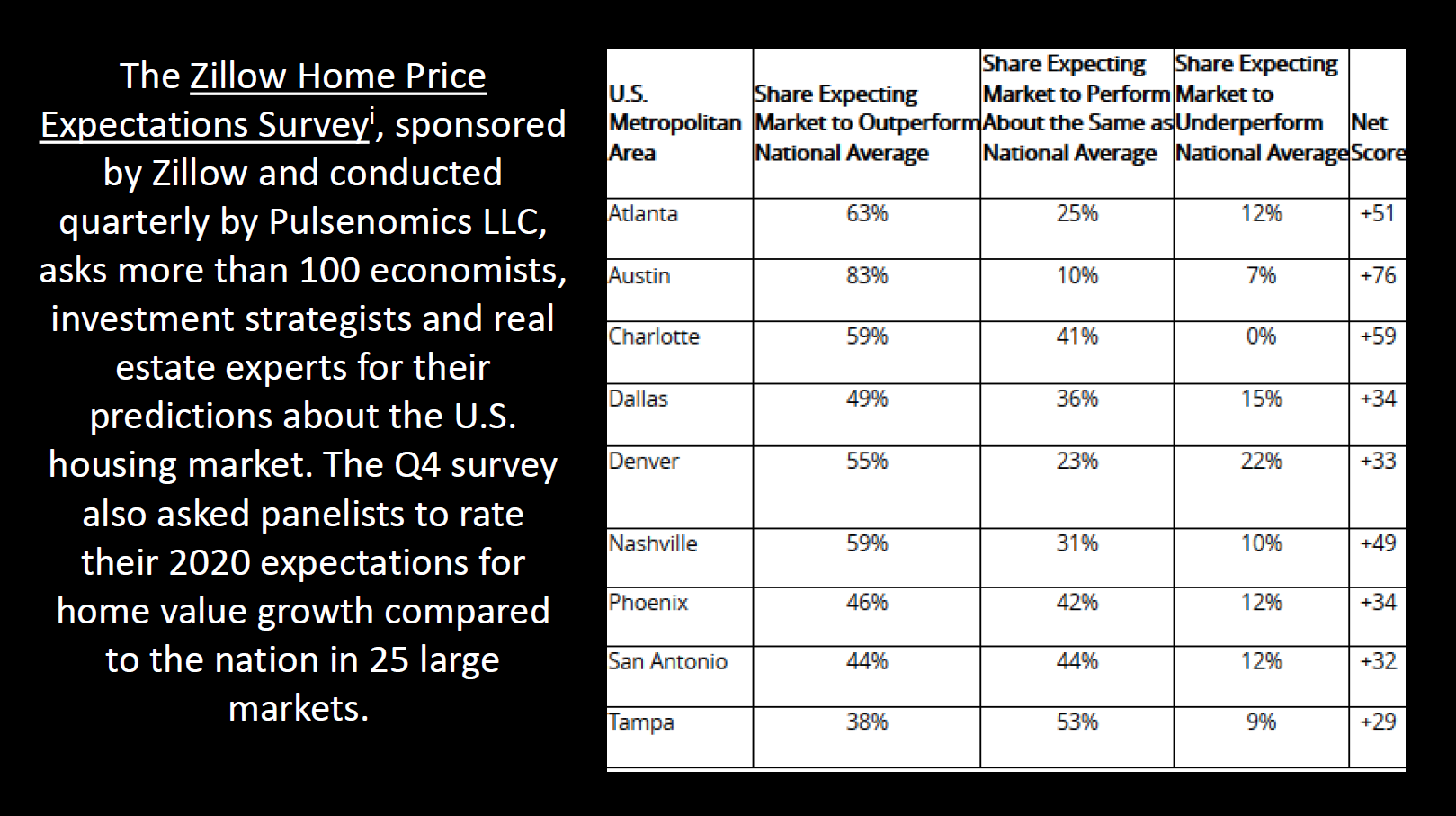 In 2020, Phoenix is expected to achieve results better than the average city in the United States. The quarterly survey was conducted by Pulsenomics. In the survey, more than 100 economists, real estate experts and investment strategists voiced their predictions about the real estate market in the United States in 2020. The survey looked at the top 25 metropolitan areas in the country. 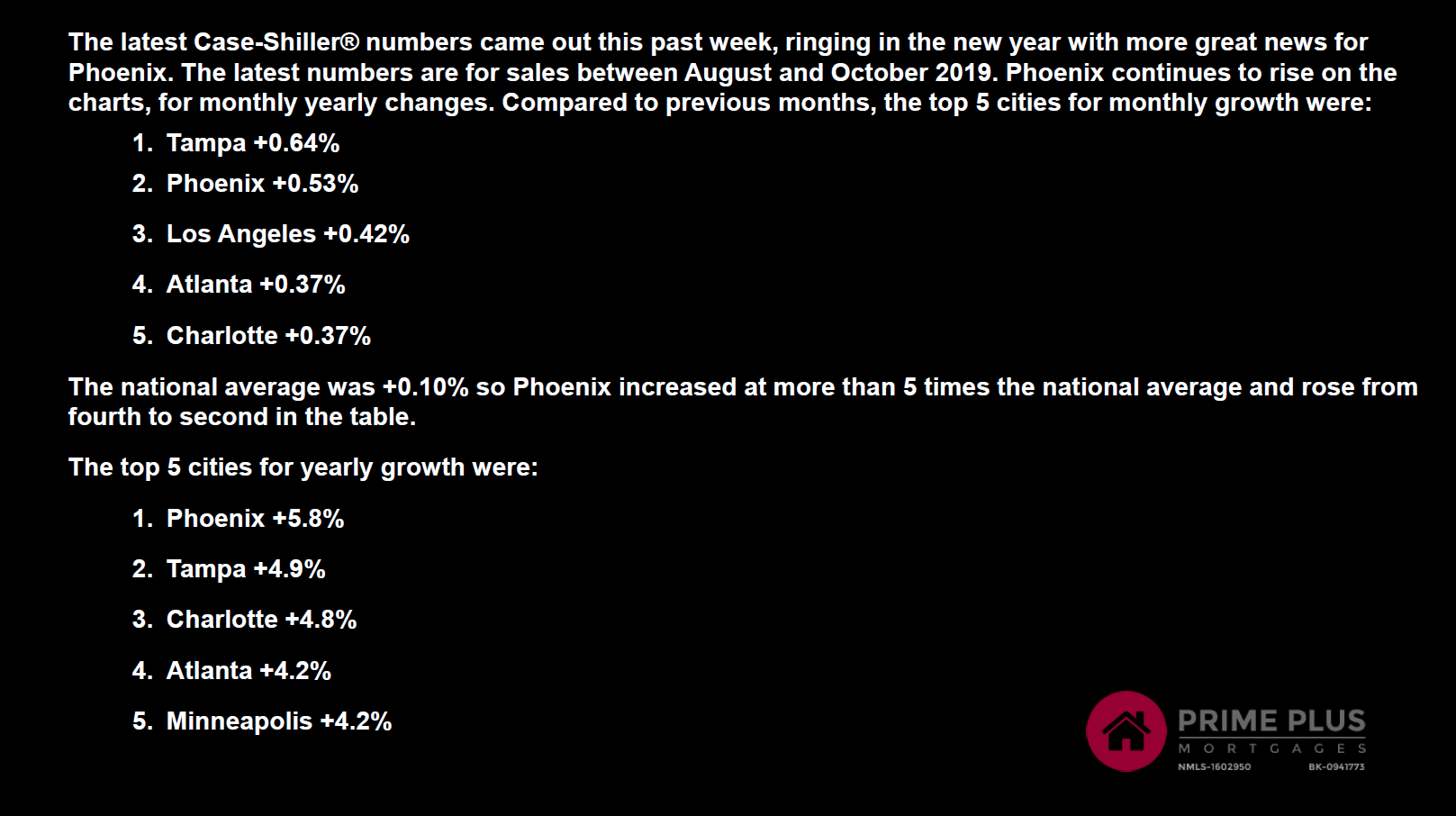 In the recent Case-Shiller report, Phoenix also had excellent results. The survey included home sales that occurred between August and October 2019. According to the survey, Phoenix is beating other metropolitan areas for month-to-month and year-to-year growth.

Compared to previous months, Phoenix had the second-best monthly growth in the nation. According to the Case-Shiller numbers, Phoenix's real estate market advanced by 0.53 percent. In the United States, the average growth rate was just 0.1 percent. This means that Phoenix had a growth rate that was five times better than the average growth rate. Because of this impressive growth, Phoenix advanced from fourth place to second place on the list.

When you look at Phoenix's year-to-year improvement, the numbers are even better. In 2019, Phoenix's market was 5.8 percent better than it was in 2018. This was a better improvement level than any other state in the country. Tampa took second place on the list with a growth rate of 4.9 percent, which was almost an entire percentage rate behind Phoenix.

As you can see in this national map from HPI, the entire state is also performing well compared to the rest of the country. Idaho is the only state in the nation that is doing significantly better than Arizona is. Even though Idaho has a higher rate of real estate sales than Arizona, Phoenix is still ahead of Boise when it comes to sales growth. 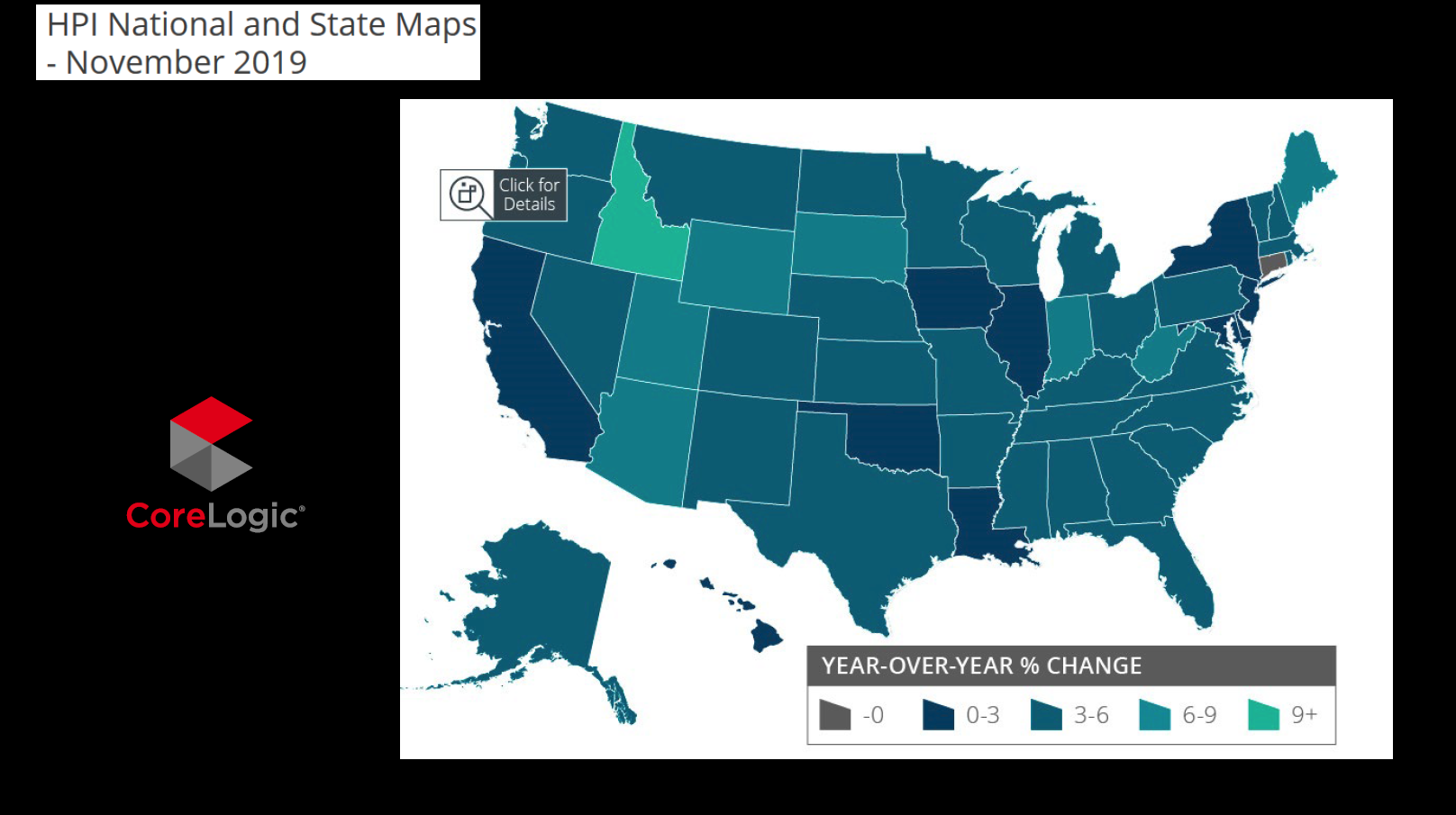 Phoenix Is Looking Forward to a Bright Future

There are a number of factors that can affect home prices in an area. Affordability and interest rates are two factors that affect the demand for homes. For example, many people are priced out of the San Francisco market because homes are too expensive. If the same homes cost half as much, more people would want to buy them. Thankfully, Phoenix does not have to struggle with a demand issue. Because of population growth and affordable properties, the demand for homes remains strong in the area.

Low interest rates also influence the demand for homes. If someone wants to buy a $200,000 to $300,000 home, they will spend around $100 to $200 less a month on their mortgage if their interest rate drops by 1 percent. Right now, interest rates in the United States are at about 3.5 percent. When interest rates fall, it makes mortgages more affordable. This means more people can afford to buy a home, and people can buy a more expensive home for the same monthly cost.

Thanks to the high demand for homes and a growing population, the Phoenix market is expected to do well in 2020. Even though there is a growing demand for real estate, Phoenix still does not have a high enough supply to satisfy everyone who wants a home. Until supply and demand are in balance, Phoenix's real estate prices will continue to grow. While this may make it harder for buyers, investors and current homeowners can enjoy having a more valuable property.

We love discussing this with our current and potential owners and investors. If you have any questions about how this could impact your investment property or property management in Phoenix, please feel free to contact us at Service Star Realty!