HOW MUCH RENT FOR YOUR INVESTMENT? Get your report in minutes!

We offer full service property management tailored to you as an investor, homeowner, or landlord. Our 4 Guarantees provide peace of mind and show our commitment to excellent service. We have an extensive portfolio of single family homes, townhouses, condos, and apartments in the Casa Grande area. We want to give you confidence about partnering with us. At our no obligation consultation, we discuss your questions, goals and ideas and outline an action plan to achieve everything you need.

GET YOUR RENTAL ANALYSIS BELOW!

How Much Rent for Your Investment?

Enter your rental property addres below and get your free report in minutes!

Get Optimized Rental Value for Your Property

What We Do As Your Casa Grande Property Manager

When you choose Service Star Realty as your Property Manager, we will create beautifully detailed walk-through videos that showcase the value of your investment to prospective tenants.

Video is taking over, and here's why:

Explore the Benefits of Video

PROTECTING YOUR PROPERTY THROUGHOUT EVERY TENANCY

At Service Star Realty, we are actively involved every step of the way when it comes to tenants. We have a 78% renewal rate, with many tenants staying long-term (reducing turnover costs for you), and importantly, a 1% eviction rate.

Protect Your Most Valuable Asset

When it comes to property management, we want to eliminate the complexity and make it a simple, enjoyable process for you as a homeowner or investor. That’s why Service Star Realty is open and transparent about our fee structure. You’ll find everything laid out below so there are no surprises, just property management peace-of-mind.

With our detailed financial reporting tools, it's never been easier to keep tabs on your investment. Log into your secure online owners' portal to view statements and stay in tune with how your investment is performing.

Quality Video Tours of Your Property 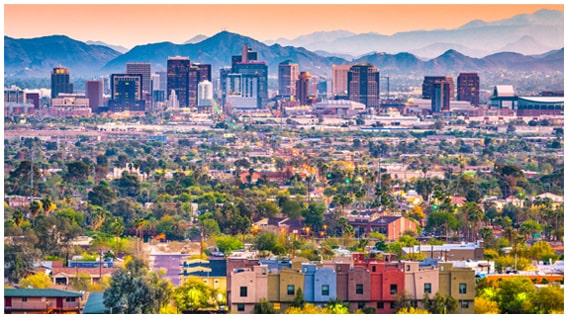 Placed within Pinal County, this city is conveniently located just halfway between Tucson and Phoenix. Originally known as a rural, agricultural town, Casa Grande has expanded to include a broader economy over the last few decades. Many residents in the town work in Phoenix or Tucson. As the population has grown in the last few decades, new retail shops and restaurants have opened up in the area.

Casa Grande was originally started in 1870 as a part of a larger mining boom in the area. By 1880, it was the end of the line for the Southern Pacific Railroad. The town was named in the same year in honor of the Casa Grande Ruins National Monument.

For the first few decades, the town grew slowly as wildfires ravaged the wooden town. After the mining boom disappeared in the 1890s, Casa Grande was nearly abandoned. It managed to gradually reinvent itself as agricultural businesses grew in the area. By 1915, the town was officially incorporated as a city. During the New Deal, it was even the site of a collective farm society.

There are darker sides to the town's history as well. During World War II, a Japanese-American relocation camp was built near the community. It was named the Gila River War Relocation Center. During its operation, the camp was hoe to famous individuals like baseball player Kenichi Zenimura and actor Pat Morita.

In more recent years, Casa Grande was transformed into the home of the spring training spot for the San Francisco Giants. When the Giants moved on, the training location was turned into the Francisco Grande Hotel & Golf Resort. In modern times, Casa Grande is still home to the Casa Grande Cotton Kings baseball team.

For shopping options, residents can visit the Promenade at Casa Grande. Opened in 2007, this new mall has a similar look to the Desert Ridge Marketplace in Phoenix. This open-air mall has almost a million square feet of retail space. Top retailers like Michael's, Victoria's Secret, the Dollar Tree and Marshall's are located within the mall. Other shopping options can be found throughout the community at sites like the Casa Grande Mall or Tri-Valley Plaza.

After finding a home through Casa Grande property management, residents can discover top restaurants in the area as well. For Southwestern fare and steaks, visit BeDillon's Restaurant. This restaurant boasts of comfort food served in an adobe home. On nice days, visitors can dine on the patio next to the cactus garden. For Chinese cuisine, locals head to the Big Wa Chinese Restaurant. Boasting of a relaxed setting, this restaurant offers generous portions and small-plate options.

Meanwhile, the best Mexican-style dishes can be found at Mi Amigo Ricardo. Cooked in Sonoran style, these dishes are served up in a comfortable atmosphere with beer and wine.